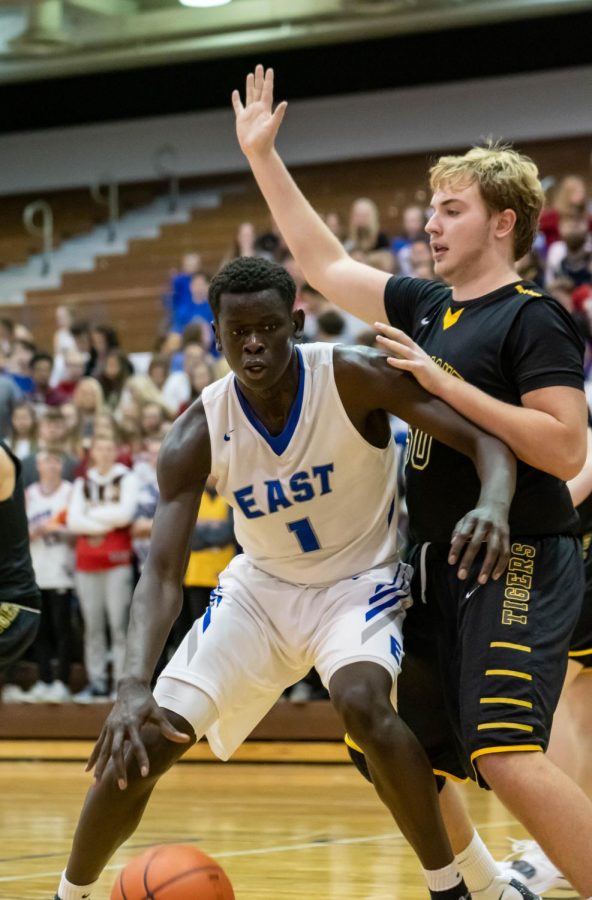 Teny Gakdeng works his way to the basket in the 63-40 win over Fremont on Thursday night.

The Spartan basketball season is upon us, as Lincoln East will attempt to fight for a playoff spot for the second year in a row. With the dawn of a new season, it brings a lot of new faces to the team, after the Spartans lost seven seniors from the previous year, but East is ready for the challenge. Head coach Jeff Campbell commented, “we are a relatively old team without very much experience. We’ve had a lot of guys who have worked their way up the program the last 3 or 4 years, a testament to our great coaches at the lower levels. But our guys understand the goal is to continue to build upon the foundation the teams before them have established.” This year, the Spartan boys basketball team will seek another playoff berth for the second year in a row. “Our players have worked in the offseason, to put themselves in a position to compete at a higher level. Most of our players competed in daily practice against last year’s team, and they saw how important it was to compete everyday. This year’s team has mirrored a lot of those practice habits, showing signs of improvement in the first two weeks of practice,” stated Campbell. As the Spartans move on to their first game against Fremont, and to the rest of the season, they are focused on not making mistakes, and putting the game in their control, rather than the opposition. “We need to focus on US, more than THEM. We need to dictate how the game will be played, and make them match our level, instead of us playing to their style.” Campbell exclaimed with emphasis. As a new season of Lincoln East basketball approaches, the team will face challenges, but the ultimate goal is clear, and the Spartans know how to control their own destiny.