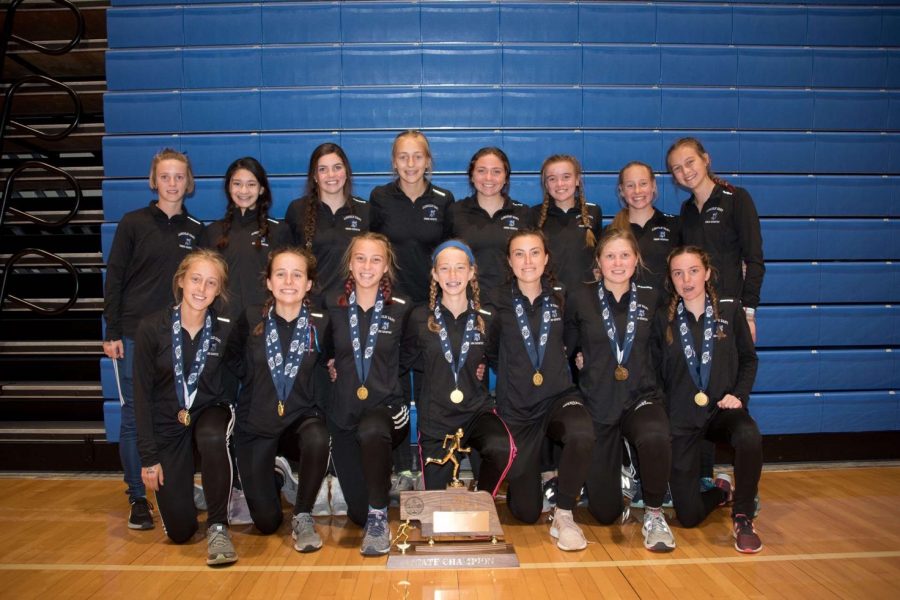 Throughout the 2019 cross country season, the Lincoln East Girls team looked like the favorites to repeat as state champions when the season came to a close in late October. They got out to a quick start with a 4-0 record after the first 4 meets of the season. Then a slight mishap at the UNK Invite in Kearney with a close loss to 2nd ranked Fremont in part of top 5 freshman Kylie Muma’s minor injury that kept her out for 2 weeks. But after that, the Spartans won their next 3 meets by 31, 17, and 49. So leading up to the state tournament, there were two true teams in contention for the state championship, Lincoln East and Fremont.

On the day of the state meet in Kearney, I asked Freshman Berlyn Schutz on what the team’s mentality was prior to racing. “Our mentality was essentially a business trip. We knew what needed to be done and we had put in the work in order to get to this spot. We were all confident and ready to go.” The team had it pounded into their heads by the coaches that they had the talent to win the meet back to back years but it was going to have to be the mental side of the sport that would push them past other contenders like Fremont and Papillion LaVista South.

The day finally came when the girls would have the tough task of trying to become back to back champions for the first time in Lincoln East cross country history. It was a beautiful day for a cross country meet, unlike the last time the Spartans ran in Kearney. Last time in Kearney, at the HAC Conference meet, it was 27 degrees with a 20 degree wind chill. But on October 25th, it was around 60 degrees with a light breeze, almost the perfect weather for a race. The girls made sure to do everything in the exact same order as all of the previous meets, write “Run as one” on their hands and go for a light warm up before finishing stretching and walking to the line. East walked arm and arm to the starting line and it was finally race time. All of the hard work of an entire season of practices, Monday-Saturday, and summer runs at 7:00 in the morning, all led up to this.

When the gun went off, East got out front quickly with a group of Fremont and Papillion LaVista South girls. The thing is, everyone had stepped up their game for this race whether they knew it or not. In previous races, East’s top 4 runners were able to get a huge lead on everyone else by the 3,000 meter marker, but as they neared that mark at state, there was a large group of around 20 that were still sticking around. By 4,000 meters, East Freshman phenom Berlyn Schutz was out front with around a 10 meter lead, she had won every meet she’d raced in so far this season going 7 for 7. A little behind her for East was the other phenom, Kylie Muma, followed by Senior Taylor Searcey and Senior Abbie Schmidt. As the top girls entered the chute, you could tell that it was going to be a close race, the top 4 girls were Berlyn Schutz, Sophomore Elli Dahl from Fremont, returning all class champion Junior Kaylie Crews from Papillion LaVista South, and Kylie Muma. Berlyn still had around a 5 meter cushion but once she was within 15 meters of the finish, Elli Dahl started striding out. She was quickly gaining on Berlyn and by the time that she had glanced back, it was a second too late. And by a second I mean less than a second, Elli Dahl finished with a time of 18:35:6 and Berlyn Schutz finished at 18:36:0. This was one of the closest finishes in recent memory for the sport of cross country, especially at such a high caliber meet like the state one. It broke Berlyn’s freshman streak of 7 wins in a row and set up for an interesting team finish between the top two contenders the entire season, East and Fremont. The main goal for the team was still in tact, a back-to back state championship.

East and Fremont went back and forth with top 20 finishers, East’s 5 scoring runners finished 2nd, 4th, 9th, 13th, and 14th. While Fremont’s top 5 runners finished 1st, 10th, 15th, 18th, and 19th. But in the end, East was able to edge out Fremont with a team score of 39, while Fremont finished with 59. The East girls were back to back champions for the first time in the schools history.

After the state championship ceremony, I interviewed two of the vital parts of the success for the team, Berlyn Schutz and Taylor Searcey. I started by asking Berlyn how it felt to be a part of a state champion team. “Being apart of a state championship team is so special. To know all of our hard work paid off like that is truly unforgettable and I’m very grateful to be a part of it.” I then followed up with what she loved most about the team, “What I love most about our team is our close bond. Every run and moment is filled with laughter and inside jokes, and during races we run together and don’t leave anyone to struggle on their own.” I also asked Taylor she loves most about her team, “The thing I love most about my team is that we all love and care for each other so much. We are a family that is always there for each other and we always have each other’s backs.” I don’t think that it’s a coincidence that the extremely close bond that the team shares leads to state championships. This has been established by the 15 Seniors that the team had this year and will more than likely continue in years to come.

To close out each interview, I asked each of them if there was one thing that they could say to someone that was on the fence about doing cross country or not, what would you tell them? Berlyn responded first, “I’d tell them to go for it! As a Freshman, it’s the best choice I made to go out for East cross country, because being apart of this team is so special. You won’t regret it!” Then Taylor responded with a similar answer, “I would tell them you’d regret it if you didn’t. This team becomes a family, the love and support you get out of cross country is like no other sport I’ve done. Yes, not a lot of people in the school support cross country, but the running community is so conscious of each other and is truly special.” So if you’re thinking about going out for cross country, do it, like both girls said it’s truly a special team and Taylor said it best, “For the few days after winning you feel on top of the world. But that feeling fades. The thing that doesn’t go away are the memories made with amazing teammates all season long.” This was the end of a truly historic season and just the beginning of a legacy.