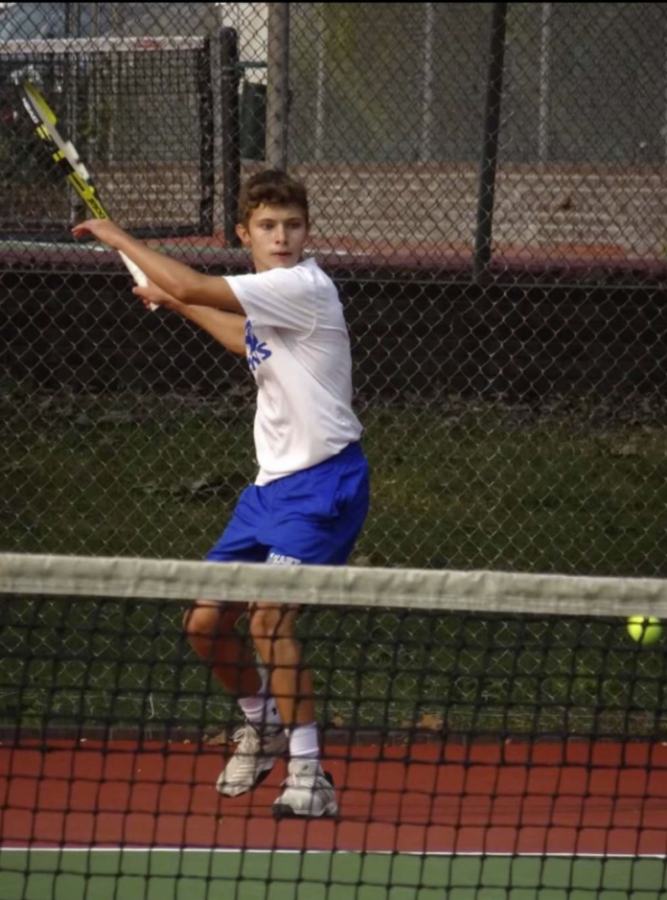 The tennis team finished state runner's up to Lincoln Southwest.

With Lincoln East Football’s loss against Omaha Westside a few weeks ago in the quarterfinals of the State Playoffs, the fall sports season officially came to a close. Football, Cross Country, Volleyball, Softball, Boys Tennis, and Girls Golf all concluded within the last couple of weeks and had highly successful seasons. This article is intended to be your one stop shop for information on each of the teams’ seasons and how they were able to navigate a season filled with so many unknowns.

Football: (7-3) 8th at State
The 2020 football season began with a lot of questions related to both on and off the field issues. Off the field, the coronavirus took center stage as football was the first major revenue high school sport in Nebraska to begin practice and games and involves the most contact of any of the fall sports. There were protocols in place to minimize the spread of the virus as well as keeping as spread out as possible. While football is a sport where social distancing can not always be followed, the Lincoln East football team did an excellent job of adhering to protocols and made it through the season with only a couple of minor hiccups.
On the field, the Spartans had to replace much of their offensive and defensive lines but returned most of their skill position players (quarterback, wide receivers, running backs). Junior Noah Walters started as quarterback this season after senior Austin Schneider transitioned to wide receiver late last season and Walters broke almost every record in the books for the Spartans. Most passing yards in a game, most touchdowns in a game, most passing yards in a season, and most touchdowns in a season to lead an offensive explosion for the Spartans.
Lincoln East was one of the most exciting teams to watch this season thanks to Walters and receivers such as senior Carter Glenn, junior Cooper Erickson, and Schneider. East finished 7-3 on the season and made it all the way to the quarterfinals of the State Playoffs losing to 2nd ranked Omaha Westside 49-29 to conclude the season. The Spartans lose a lot of playmakers but Walters will return and that should make East a must watch team next year as well.

Cross Country: Girls #1 at State; Boys #9 at State
If there was one word to describe the boys and girls cross country teams at Lincoln East, it would be consistent. The Lady Spartans won the state title for the 3rd consecutive season and the boys had their 2nd straight top 10 finish even with the loss of several key seniors on each team. But it was even an odd season for cross country, a sport with very minimal contact, but East is fortunate enough to have large numbers on their cross country teams. Typically, the teams combined are well over 110 people, one of the largest in the state, but this season it was closer to 75.
When talking to Lincoln East head cross country coach Brian Kabourek, he talked about how the team was able to navigate a season with so much unknown. “I think we had a large group of individuals that all were pretty understanding, they all wanted to run. They all understood that to get to that goal, we had to follow certain protocols and we did.” Those protocols included hand sanitization and Covid screening prior to practices and meets, as well as meets that were more spread out and allowed for more time in between races.
As for the future of Spartan cross country, it looks bright. “I think the future’s bright, there’s a lot of young talent, and we’ve been fortunate, very fortunate,” Kabourek said. “I think a lot of teams would be very jealous, not just of us in terms of our talent. But I think coaches from other sports might be jealous of the leadership that we have in place.” The seniors set the tone for the season and have helped the juniors to prepare for the next season and carry on the traditions that they have started. One thing is for sure, Lincoln East cross country will continue to be one of the most consistent programs in the state.

Volleyball: (11-11)
The Spartan volleyball season got off to a rocky start as a positive case on the team set the East season opener back two weeks but once they were able to play, the Spartans showed why the future of the program looks good. Several underclassmen played significant roles throughout the season, sophomore Brooklyn Fuchs, along with freshmen Aaliyah Bradford, Shandy Faalii, Reese Boyd, and Megan Waters all found playing time on varsity this season.
This was head coach Nicole Gingery’s first season as coach and she was able to help the team a lot, senior Brooke McCartney said. “The team chemistry was the best it’s been for years. A lot of the energy to keep us motivated came from the underclassmen, they stepped up and played an important role on this team,” McCartney said. The highlight of the season was likely when East swept rival Lincoln Southwest in three sets at home. The Spartans had it clicking on all cylinders that night and will look to build off an 11-11 season for Nicole Gingery’s second year at the helm.

Softball: (30-11) 5th at State
One of biggest turnarounds of the season was the remarkable season put forth by the Lincoln East Softball squad. Just last season, the team was 22-19, a solid record but middle of the pack in a loaded Class A field. But this year, the Spartans improved to 30-11 and finished 5th at the state tournament in Hastings, Nebraska. Long time head coach Lance Kingery thought that there were multiple things that led to the impressive turnaround this season.
“I think there are a myriad of things that led to the success this year, but a few are kids maturing and growing into their roles,” Kingery said. “We added some new players and lost a few players from the year before, so the makeup of the team was different also. But first and foremost, I think the players liked each other and wanted great things for themselves and their teammates.” As for the ability to carry over that success into next season, Kingery believes that the underclassmen will jump at the opportunity for the open spots on next year’s team as the Spartans lost some talented players.
“We lost five seniors, and they played a large role in our success,” Kingery said. “Jaydan Shigley, Zoie Armstrong, Whitnee Curry, CeCe Elliott and Lily Jansen. With that loss though comes the opportunity for youngsters to step up into new roles next season. We had some young players play a lot of innings for us, such as Sydney Walz who was a freshman. Everyone this past season found ways to contribute which was awesome.” This season was one to remember for sure as the Lady Spartans were able to come back from down seven runs in the final inning of the district final to punch their ticket to state and complete a season to remember.

Boys Tennis: State Runners Up
One of the more successful programs in Lincoln East athletic history is the Boys Tennis team. In the last 10 years, East has finished top five in the state seven times. Including 3rd place finishes in both 2011 and 2016 along with runners up finishes in 2018 and this year, 2020. The Spartans had a very successful season with a close runners up finish at state, but what head coach Christopher Stock was most proud of from this season had little to do with on the court success.
“I am most proud of the fact that we had our largest squad since I’ve been here, including five seniors,” Stock said. “We were able to have a cohesive team that enjoyed each other’s company, and they competed with their highest effort each time out,” Stock said. Effort is huge in any sport but especially a sport such as tennis. It’s just you and one or three other people and a lot of matches can come down to a single point. East was able to win multiple tournaments this season including the HAC (Heartland Athletic Conference) Title and the Capital City Quad. As for the future, Stock doesn’t like to look too far down the road but he does know one thing. “Anytime a program has guys that dedicated and who battle on the tennis court like our guys, the future will always look positive to me.”

Girls Golf: 8th at State
One sport that wasn’t nearly as affected by the Coronavirus as others was golf. The Girls Golf team was able to practice with very little restrictions while on the golf course. They wore masks and socially distanced when they met as a larger group but once they were out on the course, it was just golf. While on the course, East had a very successful season. According to head coach Brian Bullington, this was one of the best seasons in school history thanks to great leadership by a group of five seniors and a lot of stellar individual performances as well. But what about the future? “Our future looks bright with three returning state qualifiers and a solid group of younger players from our very successful JV team,” Bullington said. The Spartans failed to make it to state last season but this season they finished 8th and will look to build off of that finish next season.