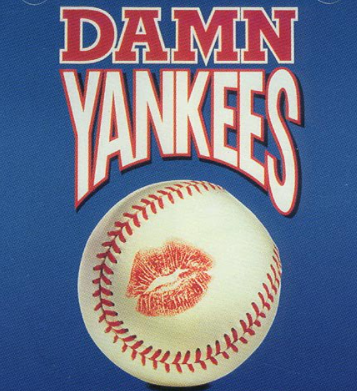 This is the official playbill poster for the Damn Yankees musical.

On April 8th, 9th, and 10th at 7:00 pm, Lincoln East’s Vocal Music Department will be performing “Damn Yankees” for the spring 2021 musical. It is a musical comedy written and set in the mid 1950s.
“It is about Joe Boyd, a man in his 40s, who is a huge fan of the Washington Senators baseball team,” Shelly Self, the show’s artistic director, said. “One night, after the Senators lose a game, Joe says he would sell his soul if the Senators could beat the Yankees. In comes Mr. Applegate (a.k.a. the devil) who convinces Joe to come with him and he will help the Senators win the pennant. Joe is transformed into a 22-year old ball player and leaves his wife and life he knows to go play baseball.”
The play is based on the book, “The Year the Yankees Lost the Pennant” by Douglass Wallop. It is written by George Abbott and Douglass Wallop with words and music by Richard Adler and Jerry Ross.
“I chose a show where blocking and dance numbers could be staged to help with social distancing,” Self said. “Usually, we do shows that have full cast dance numbers and this one does not, limiting the number of students on stage at the same time. Our dance numbers also usually have quite a bit of couple dancing. This year, the dancing is much more individual. We also reduced the cast size.”
She also mentioned that the show will be different this year because it will be live streamed and since the actors will be wearing masks, they will have to be more aware of their body language and actions.
There will be 48 students in the show but some familiar names are Seth Eveland playing Joe Boyd, Hayden Rooney playing Joe Hardy, Aedan Strauss playing Mr. Applegate, Hannah Robb playing Meg (Joe’s wife), Claire Ehlers playing Lola, and Ella Swank playing Gloria (a spunky newspaper reporter). There are many other characters in the show as well as singing and dancing. In addition, there will be a 16-20 piece pit orchestra conducted by Nicole Shively. And don’t forget the technical crew that will build and paint the set, provide lighting and sound effects, help with costumes, make-up, and more.
Some other important people who are involved in the show are Lisabeth Wissink (Vocal Director), Pat Vendetti (Technical Director), Caitlin Self (Choreographer), and Jennifer Aliwarga-Carlson (Accompanist).