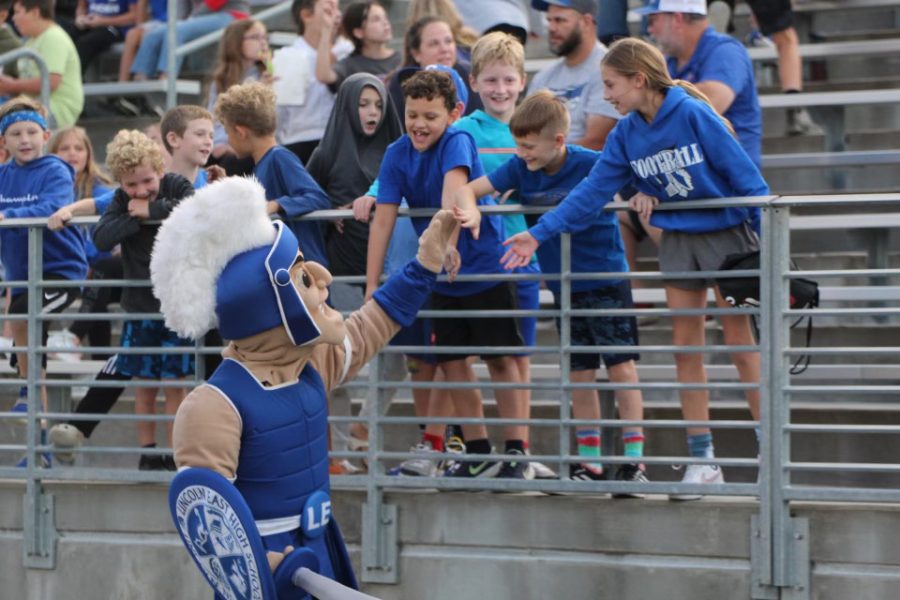 Martin the Spartan at East's Friday 17, 2021 Football game. Pumping up the crowd while high fiving kids.

Disclaimer: The following is a creative story based on the made up character, Martin the Spartan. This story is made up of only fiction.

Everyone knows about Martin the Spartan. He’s East’s school mascot that does a little dance when East’s football team gets a touchdown. But Martin is so much more than just our school’s mascot. He has a backstory.

Did you know that, “ grandfather Markus was the first mascot of the school,” Martin the Spartan said. He comes from a whole line of mascots with his Grandfather starting in 1967. His grandfather is not the only one who was a mascot in the family. His father and cousin also were Mascots at East in the 80’s and 90’s.

In Martin’s free time he watches his “favorite basketball movie … the original Space Jam,” Martin said. He loves to watch sports movies to keep up with past and present sports. He also watches baseball and football movies.

He also enjoys doing sports himself. He has to keep up his appearance somehow. His favorite classes are, “gym class and weight lifting,” Martin exclaimed while showing off his muscles. Martin doesn’t just focus on bronze but also brains.

“Threat and in geometry,” English teacher Sarah Hartman said. A well rounded schedule can do wonders for a student. Balancing out brains and bronze, but he also uses his skills outside of school.
“He really likes his protein, his meats,” Hartman said. “He cooks steak with roasted corn and mashed potatoes.” If he has time he might even use those skills in one of East’s cooking classes next year. But right now he is focused on his classes he is in now.

“He is very studious and takes his academics here very seriously,” Sarah Hartman said. With all of that you’d think he doesn’t have a weakness, you’d be right, at least his weakness is unknown if he has one. The other thing was that he hasn’t found a love interest.

“Martin actually performed with the team in one of the dance team halftime performances,” Sarah Hartman said. Working with the team and making sure everything is right can be a challenge on it’s own. Sarah Hartman is the director of Martin the Spartan and helps him work out how to interact with the crowd.
“It is a lot of independent work,” Sarah Hartman said. “Martin is always working to improve and to find new ways to get creative, to cherry on his Spartans.” He works his hardest to keep school spirit up and keep everyone happy at East.

At the end of the day, what will always make Martin’s day is the “presents of everybody at the events,” Martin said. “The kids get pictures with me, I get to high five the kids, I get to bang on my shield. Supporting spirit for the school.”