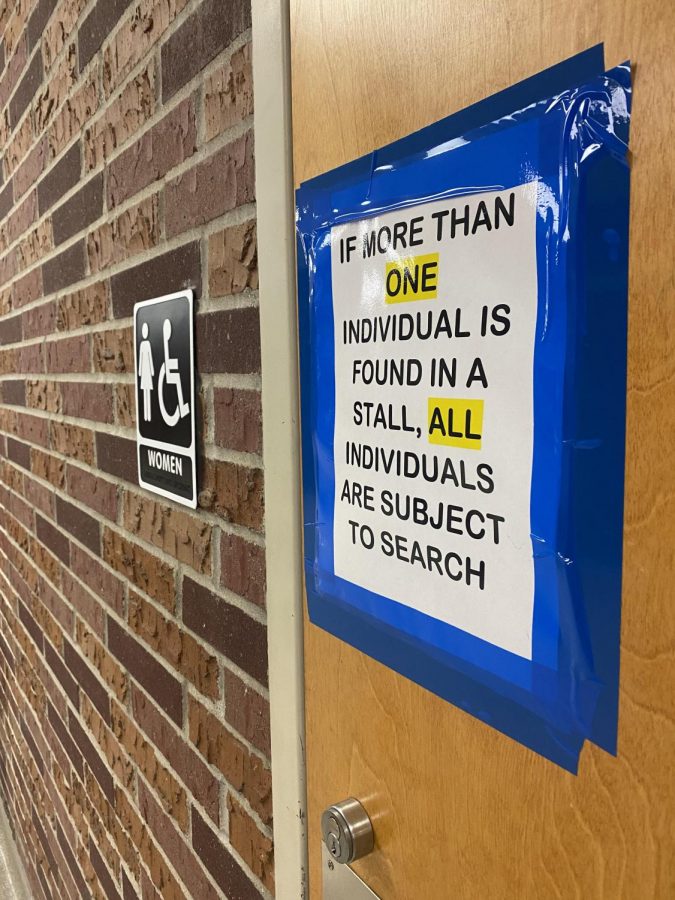 Students are now being monitored when entering and exciting the bathroom. Administration has taped signs on bathroom doors to warn students.

During the month of September at Lincoln East High School, the devious lick trend has caused destruction on school property. Soap dispensers have been stolen, bananas have been shoved down toilets, toilets have been clogged with toilet paper, and trash has been dumped across bathroom floors. These problems have been happening all over the country, and the social media app Tik Tok has encouraged these disruptive behaviors. The devious lick trend encourages students to vandalize and steal school property, especially restrooms. Within a matter of days, one video about a student stealing a box of disposable face masks from his classroom and referring to it as a “devious lick” caused schools across the country to be vandalized.

“My biggest beef with it [the trend] is that it’s so entirely destructive to our societal norms,” School Counselor Lori Hemmett says. “It’s almost chaotic in a way, and where as other peer pressure things sometimes only affect the person doing it, this really affects the whole community”

Hemmett suggests that the students’ motivation to be involved in this trend is getting approval from people on social media and being praised for their negative behaviors, as well as encouraging these bad habits. Because students are getting approval for their behaviors, they think their behaviors are okay, even though they’re not. Hemmett believes that social media is not to blame, that it is simply the outlet for these students’ negative behaviors.

With this trend circulating social media, Lincoln East has had to adapt to these situations in many different ways. One way the school is preventing this problem is by having security guards stand outside of school bathrooms during passing periods in order to monitor students. They have also had to shut down bathrooms due to a lack of soap dispensers.Many students are upset with bathrooms being closed, but the administration has reason for doing this.

“We’ve closed bathrooms, which has caused large inconvenience for a lot of students,” Lincoln East Principal Susan Cassata says. “We’ve lost 17 soap dispensers and we have no replacement soap dispensers because they’re all on back order, and so the bathrooms that have lost 2 soap dispensers will be closed until we are able to get at least one in.”

With the vandalization of soap and hand sanitizer dispensers, schools worry about students and teachers health as we are in the middle of a pandemic. When students are being encouraged to wash their hands frequently to prevent the spread of Covid 19 and bathrooms are missing soap dispensers, the only option is to shut them down.

Not only is this adding extra workload to security and administration, it has also added extra cleanup for the school’s janitors. This trend has added maintenance that the janitorial staff should not have to worry about. There are only 4 custodians here at East High School during the day, in comparison to over 2,400 students. These custodians are here to make sure the school is clean and sanitized, not to clean up after our pranks Cassata informed.

This has caused multiple levels of frustration,” Cassata states. “I understand, kids think it’s funny, but it’s not. It’s not funny to vandalize a building or even to talk about it in a way that disrupts the simple process of going to the restroom.”