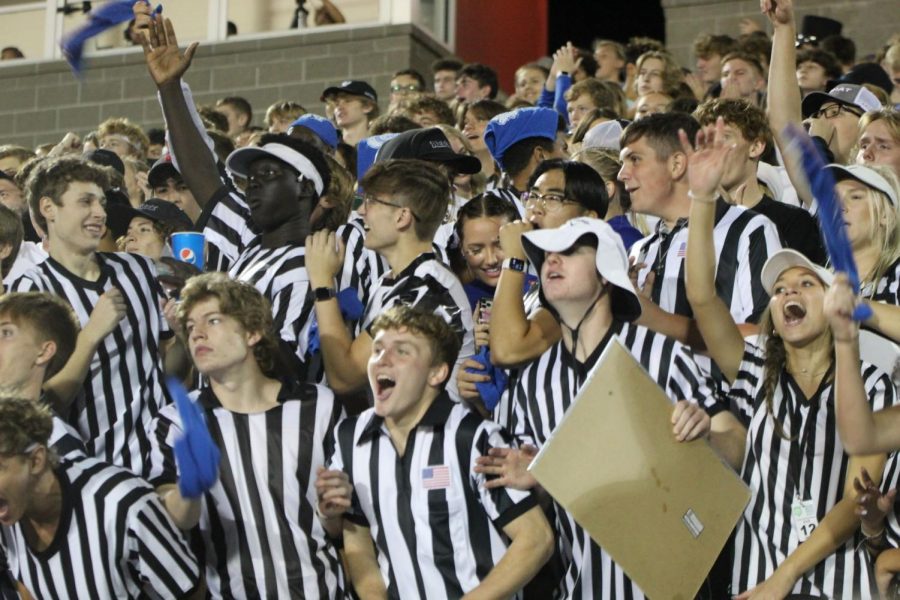 East students at the Millard North versus East High football game on September 17, 2021 at Seacrest Field. The theme for the night was referee and the student section was filled.

Meritocracy is defined by the Mariam-Webster dictionary as “a system, organization, or society in which people are chosen and moved into positions of success, power, and influence on the basis of their demonstrated abilities and merit”. Meritocracy can be found all over our society from academics, to sports, to the government. However, whether or not meritocracy is a realistic system has been up for debate for a very long time.

In an article published by Vox titled “Meritocracy harms everyone — even the winners”, Yale Law professor Daniel Markovits says,

The moral intuition behind meritocracy is that it creates an elite that is capable and effective and that it gives everybody a fair chance at success.” Markovtis said. “The problem, of course, is that elites cheat and they game the system”

Markovits was discussing meritocracy as it applies to academics, however his point can also be shown in athletics. Many think sports are given status based on merit or achievement. Unfortunately, when you look at the achievements of different sports and different athletes, there are a lot of impressive feats that go unnoticed. Just because the athlete isn’t the gender most-associated with the sport or because the sport they play isn’t “popular”. This is both a large-scale and small scale issue.

Boys and girls sports are both big at East, but certain teams get more attention than others. Both groups have their strengths, for example reserve tennis coach Alex Kolbo

“A strength [of the boys team] is that they tend to be more competitive…” Kolbo said. “…a big strength for the girls team is team camaraderie”.

So if there isn’t much of a difference between the teams, so why is there such a contrast in the attention they get?

East High School athletic director Zach Limbach says about the topic,“I do feel like there is a huge disparity in that amongst sports in general…” Limbach said. “When you look at East high I do feel like we’ve actually had, especially recently, more success in our female sports than our male sports.”

Limbach also said, “football is way more attended than any of our other sports”.

Of course this isn’t just an East High School issue, this is a worldwide issue that opens up questions about why we value different teams and why. Is it tradition, or interest? What keeps us going to certain sporting events and staying home from others?

With all this in mind, it is also important to note that East is a school that tries to support their athletes, no matter the sport or gender. Limbach says about the topic, “I think we as a school support each other more than what I see other high schools in the state do. I think we have a tremendous student section that go out and actually actively go out and look for ways to support”