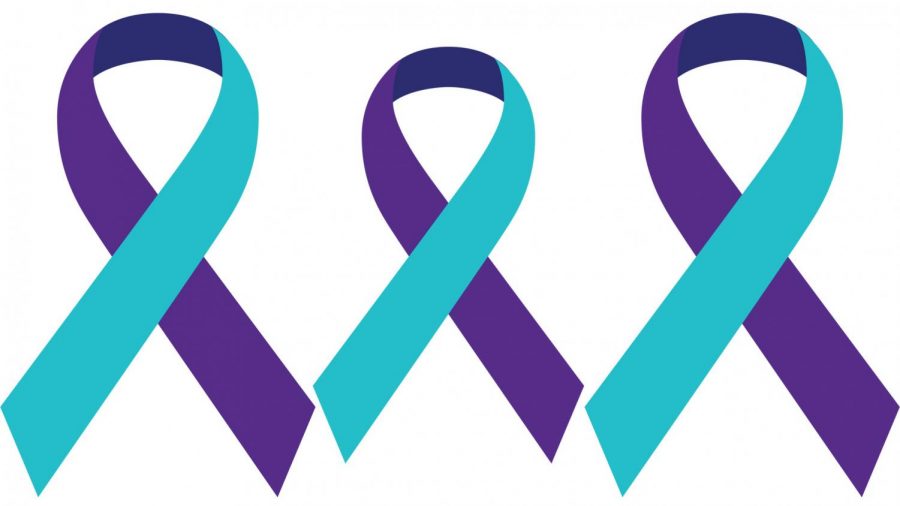 The purple and turquoise ribbons of National Suicide Prevention Month.

Through September, National Suicide Prevention Month is held, which sheds light on how the national community can help those who are struggling with suicidal thoughts, reaching out to families of suicide victims, and remembering those who lost their lives. High school is an extremely mentally challenging time of a person’s life, which is why it is important to support everyone of the East community in the battle against suicide. The school counselors of East work with students to be a helpline to those who may be at battle with suicidal thoughts. Also, the Hope Squad of East is a student-run committee that keeps an eye on at-risk students and knowing the warning signs. As one, East continues to hold suicide prevention at high importance.
Initially, National Suicide Prevention Month first was recognized in 1975. According to Suicide Lifeline Prevention, the month of September was recognized for “mental health advocates, prevention organizations, survivors, allies, and community members unite to promote suicide prevention awareness.” Along with the month, the day of September 10th has been named the official day of awareness, and the week surrounding with it for being National Suicide Prevention week. With the day and week being named, it allowed September to be the official month of prevention.
Suicide is the third leading cause of death in adolecsents. In fact, a study done by professors Benjamin Hansen and Matthew Lang proved that the rate of suicide over a multitude of years in teens dramatically dropped while school was not in session, during summer and winter break for example. Truly, what is important is to support students and their mental health while they are in the school environment. With this, the website, Mental Help mentions one issue, “It is also possible that our schools are just too large. Too many young people can get overlooked because they become anonymous in schools that have so many students that the day is divided into shifts of attendance.” So, this brings to a larger question, what can East do?
School counselors at East have a big part in helping students’ success not only academically but mentally as well. Lori Hemmett, a counselor of East, says “School counselors are not therapists. What we can do is triage with students when they are struggling with their mental health, so we try to partner with a student’s outside provider, a therapist that they already see…so we can support that therapeutic plan at school.”
Hemmett explains what resources are available to report a concerning situation of student, “We have several different ways to acquire the information, one might be a friend who emails us, it might be through the Safe to Say information through LPS, or a self report. Once we get the report we directly respond to the student if we can.”
At many high schools in Lincoln, including East, Hope Squad is an additional tool at suicide prevention. Idaly Dell Rello, a senior of East, has been a part of this club ever since the beginning. Idaly says,“Hope Squad serves the purpose as a suicide prevention group, a peer to peer, we are like the eyes for the teachers and we look out for the for the students if we see them having a hard time.”
“First we were all nominated by our peers because we were all seen as people that were trustworthy and helpful, I saw that as a good sign that I am someone that could be serving a purpose of something greater and preventing suicide. I did find a good underlining of purpose,” Idaly says.
The students and staff of East all must work together in order to prevent suicide among our thousands of students, which may seem like a large task, but Idaly gives one strong message, “If you see someone having a hard time just ask them how they are really doing, with that question it opens up a conversation, having that curiosity and care for others can go a long way.”