“The Bread Bees”: One of Lincoln East’s student bands 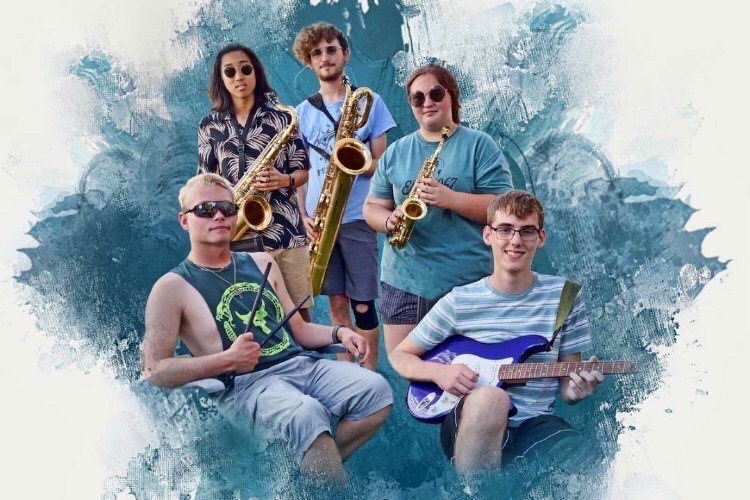 Photo courtesy of The Bread Bees

Lincoln East is home to many talented musicians and independent student bands, one of which is a rocking group of jazz musicians and artists: AJ stone, Juwon Kim, Elijah Riley, Chris Olson, Carter Kray, Hudson Fletcher, Zander Hertzel and Allie Gregis or better known as “The Bread Bees’ ‘. From sophomore friends to a tight family, the Bread Bees are true students of music.

It can be hard to pinpoint when the band really started to form. The Bees’ love of music stretches from their first time picking up instruments. Near their middle school years is when their obsession with music began to affect their friend groups. And their solidification came in a way of their common interest: music.

“AJ, Chris, Zach, Hudson, Alli and I have all known each other since 7th grade. We never fully became a group of friends until sophomore year. During that time Zander joined and this year we met Carter and Juwon,” band leader Elijah Riley said.

A laid back atmosphere of just good times and learning from each other is just what is expected. Each band member is like a unique character in a movie. Riley describes the band members in lighthearted words; AJ and Chris are “always excited” and “never give enough credit on their skill level”. Zander, Zach and Juwon are certainly loved for their “energy… and happy to be a part of something greater.” Much of their inspiration comes from bands like “Too Many Zooz ” and “Set It Off,” their music being loud and beautiful. The band is very colorful in its use of instruments, from using their marching band influences like saxophone to electric guitar.

“It’s pretty chill and exciting to be around,” said Chris Olson.

The Bees’ have not played much in front of crowds, only playing a few gigs for audiences. With big plans for their final years of high school, wanting to play for major venues outside of school. Venues like the Haymarket downtown and possibility of the Pla-Mor Ballroom. With only a few gigs under their belt the band is in the current stage of rapid growth artistically. Riley started production on fitting a song he wrote to fit the band’s style. Although the band focuses on instrumentals, the Bees’ are beginning to add vocals and guest players. However, they are not at the intensity they would like. Time constraints and the inability to have a constant time for rehearsals can tend to change the mood.

“I would describe myself as a natural leader, though I can be a little bit too tense sometimes. Especially when it comes to music.” Riley said.

But the core values of the band still stand in solitude with what their music is all about. Sharing their love and having fun with their entire band, thinking of the moment rather than the future.

“I want it to go a long way. I’d be down if it becomes a big thing or if it’s just something we do for fun.” band member Zander Hertzel said.