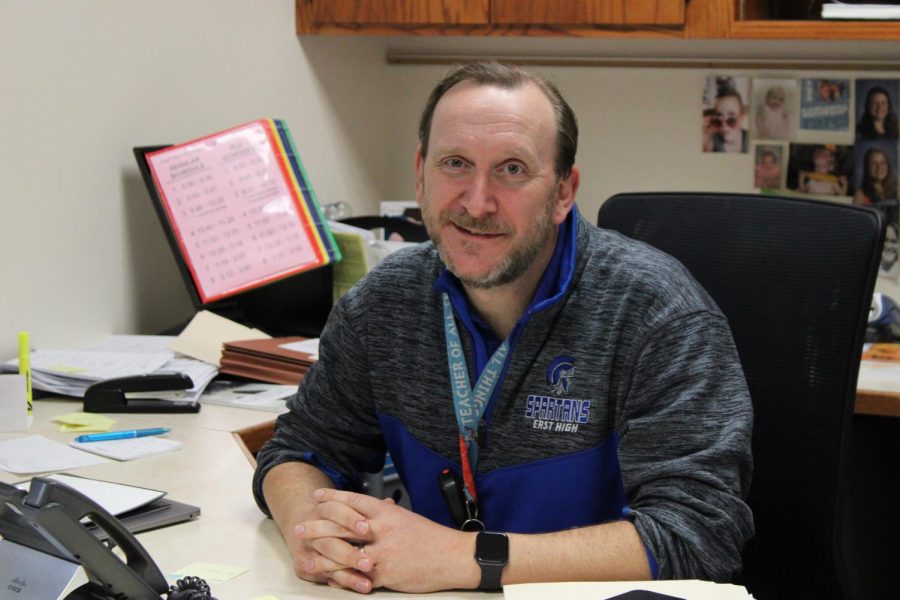 Mr. Lautenschlager is our new associate principal here at East, and is excited to take on his new position.

Since the announced position shift of Lincoln East’s current Principal Sue Cassata, two new Associate Principals have been announced as well: David Macek and Karl Lautenschlager.
East’s associate principals are currently David Bell and Jennie Anderson. The jobs of the associate principals are to work alongside East’s principal, and assure that our school operates as successfully and efficiently as possible. They make sure that our school meets educational requirements and provide us guidance too.
Macek is transferring from Lincoln’s Charles Culler Middle School, where he was a coordinator for the seventh grade. He has had numerous years of school staff experience, working at Culler since 2007. Despite never working at a high school, he is enthusiastic for the change.
“Former students of mine only had good things to say about East,” Macek said. “I remember always hearing the phrase ‘the excellence of East’ That’s what drew me here.”
Lautenschlager is not-so new to East. He’s been here since 1997, making this his 25th year. He’s been a science teacher and a department chair for the science department. Currently, his position is instructional coordinator, which he has held for the last three years. He aims to spread the word of East’s success, and to influence as many young people as possible.
“When I was a teacher, I [positively] affected the group of students that I was in class with,” Lautenschlager said. “Being in different areas allows me to affect larger groups of people as I move up.”
Both Macek and Lautenschlager noted that East’s staff has been nothing but welcoming. It’s inevitable that they will do a stellar job working alongside the new principal, Casey Fries, and that they will bring even more support and success to the Lincoln East community.